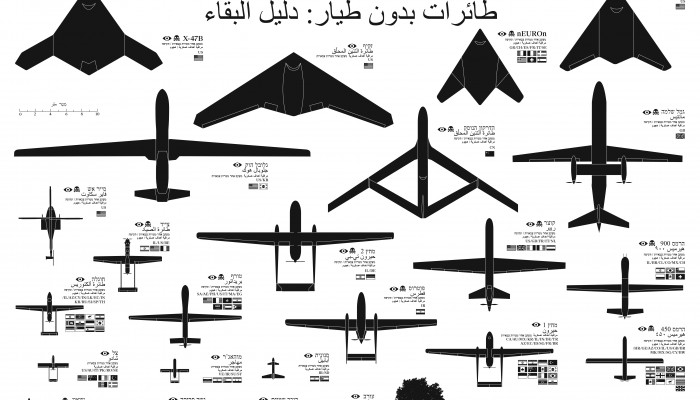 While held prisoner by the Taliban, journalist David Rohde heard drones continually circling nearby. Drones do their work in areas of conflict. Palestinians in the Gaza Strip call them Zanana because of their persistent buzz. Also in the border region between Pakistan and Afghanistan people live under the constant threat of drones that execute deadly attacks out of the blue. Some are equipped with a heavy duty motor, others sound like a lawnmower or a helicopter. Ruben Pater captured these ‘drone acoustics’ in an audio project. Pater: “The drone pilot hears none of the sounds on the battlefield. His screen is put on mute. That silence tells us something about the way we conduct modern warfare: with the remote control. ”

According to the U.S. Federal Aviation Administration, in twenty years some 30.000 drones will be flying above the US alone. Yet we know hardly anything about them. Pater therefore made the Drone Survival Guide, a guide to prepare us for a changing technological environment, to familiarize us with the present and future drones and to teach us how to identify them. The guide contains the silhouettes of the various models, indicates their nationality and what they are used for. It also presents tips on how to trick the ‘robot birds’ and on how to hack them.

Graphic designer Ruben Pater visualizes stories about complex geopolitical issues. Like the Drone Survival Guide in which he prepares us for a future airspace filled with drones.

‘The drones were terrifying. The buzz of a distant propeller is a constant reminder of imminent death.’