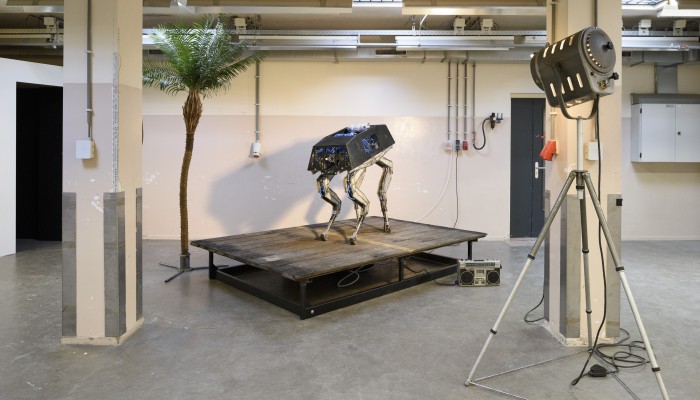 Big Dog is a military robot that transports equipment over impassable terrain. Like a loyal dog, he follows soldiers out onto the battlefield. With Big Dog as dancing entertainer, Segers shows us a society where violence, entertainment, humor and spectacle apparently go hand-in-hand.

This work by Paul Segers is a parody on Big Dog – a military robot that transports equipment over impassable terrain. Like a loyal dog, he follows soldiers on the battlefield. By presenting his version as a dancing entertainer, Segers questions a society in which violence, entertainment, humor and spectacle intermingle in a way that blurs the line between fiction and reality. How far do we go with ‘Disneyfication’ and ‘gamification’?

On the one hand, Segers confronts the viewer with the physical reality of such a military machine – modeled and named after ‘man’s best friend’. On the other hand, he focuses on how these developments are presented: namely as spectacular, cute, funny or interesting, without specifying the actual purpose – let alone going into the dark side of it.

Paul Segers is fascinated by the contrasts between nature and culture, and by machines and their place in our society. He creates sculptures, drawings, collages, videos and installations.