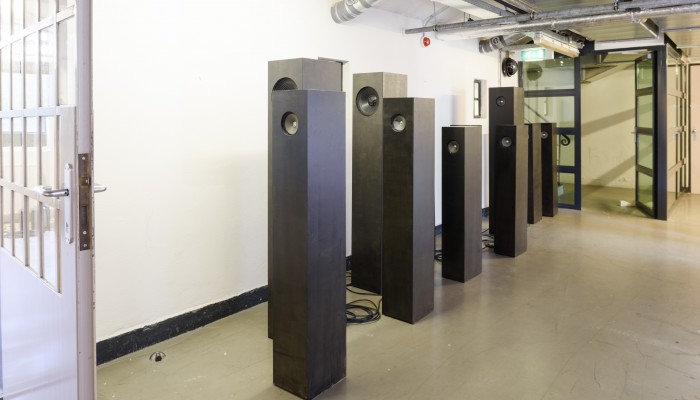 FILTER: DESTRUCTIVE FORCES AT WORK AND  FILTER: VIOLENCE AND ITS COUNTERSTRIKES

A hundred forms of grief, forming an intense cry of human suffering, pour out of hundreds of speakers of various sizes packed close together. Lamentation that connects us to the countless refugees who are now trying to reach Europe. A claustrophobic installation in which the visitor can hardly move around and which evokes images of overcrowded boats and refugees illegally crammed into containers or trucks.

Angelic Transmitter (1994, audio)
For three years the motorist travelling along the 29 kilometer Houtribdijk from Enkhuizen to Almere was accompanied by heavenly music. By tuning in to 98.0 FM he or she could hear harmonious, angelic song – sung by Toebosch herself. The Angelic Transmitter can be heard in the outside area during HACKING HABITAT.

Multi-talent Moniek Toebosch is best known for her audio artwork Engelenzender (1993). Motorists on the 29 km long Houtribdijk (between Enkhuizen and Lelystad) could tune their radios to her sweet-voiced singing.