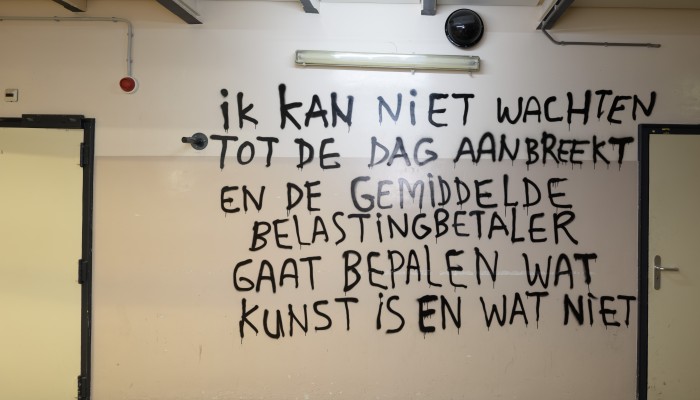 In Strangeways Utrecht we see the artist on the roof in the outside area of ​​the former Wolvenplein prison. He holds a ‘physical dialogue’ with the building, referring to a prison uprising in 1990 in a similar complex in Manchester. For more than three weeks prisoners protested against the inhumane treatment in the 19th century prison. Just as in the Wolvenplein prison, the Manchester prison also had a ‘panopticon’: a single place from which you can see the whole building and keep an eye on all of the residents.

Convinced that imprisonment has little effect, Jongeleen comes up for the endangered position of the radical other in our time. Banners displaying raw texts find their way to the public, in the film, but also in the prison / exhibition space itself. These are quotes that reveal the sharpness of public debate, with banners from the prison uprising in Manchester, but also with excerpts from online discussion fora like the Dutch GeenStijl.

“Oliver Brady was and is innocent. How many more behind bars?”

Jeroen Jongeleen’s interventions in urban landscapes and his reflections on them in his art have been influenced by graffiti, conceptual art and land art. Through his work he comments on our over-regulated and engineered societies and the position of citizens.