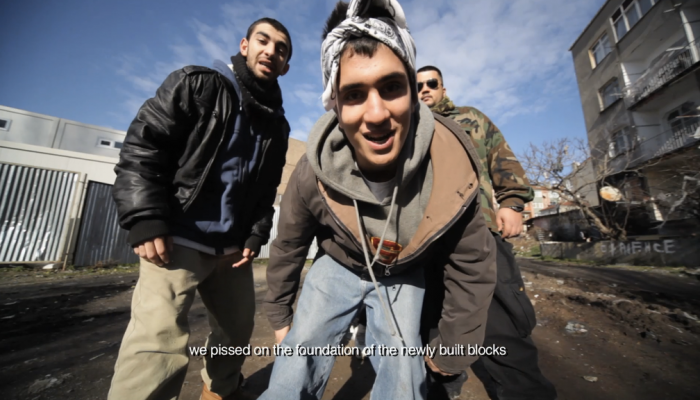 FILTER: FINANCE AND ITS LOGICS

Since the 11th century the Sulukule quartier in Istanbul has been the place where a large Roma community lives and works. An urban renewal project in 2006 drove these people from their neighborhood. They were not involved in a single decision, but forced en masse to move, to spread across the city and to sign rental contracts that plunged them deeply into debt.

In the video Wonderland, hip hop group Tahribad-ı Isyan raps about the gentrification of old neighborhoods in the city and the inequality that results. Their text is a raw indictment against TOKI, the Turkish Ministry of Housing, and is accompanied by violence against a security guard. The film was a run-up to the riots on Taksim Square in Istanbul, where people protested against the construction of a shopping center and luxury apartments. Wonderland was purchased in 2014 by the MoMA in New York.

Halil Altindere plays a central role in the contemporary Turkish art world. In his work he focuses on systems that exclude and oppress groups of people, and especially the resistance to it. His work has been on show at both Documenta and Manifesta.