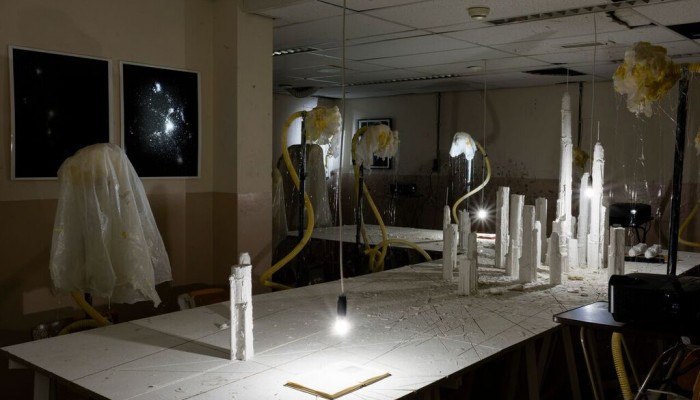 People who live in complete isolation create their own universe. They envision a world based on their immediate environment, their store of knowledge and their imagination. Prison is just such a place where people live in isolation, unable to shift their focus to an outside world. At this site and specially for Hacking Habitat, Felix Burger made the installation Weisser Zwerg (White Dwarf), the name for a star at the end of its lifecycle. He creates his own universe in an enclosed space with the available materials at hand. A light bulb becomes a star, a transport case a black hole, glass splinters become stardust. Burger sets himself at the center of this universe, as a researcher, teacher, astronaut and omniscient story teller.

Felix Burger makes space-filling installations, often a staged chaos in which video and sculpture play a major role. He became known with the work Shell Shock Syndrome at the Open Days of the RijksAcademie in 2014.