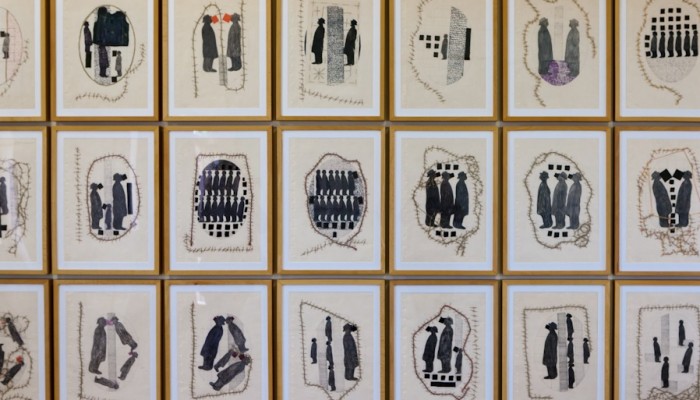 Crimes are often accompanied by a ‘bystander effect’: People watch as the violence takes place but offer no help. In her work Nicodemus portrays the bystander and asks who the guilty party is. By multiplying and placing the figure in groups Nicodemus portrays the lack of intervention in humanitarian disasters. Countless crimes against humanity take place, such as genocide, and no one intervenes. Are we as spectators, who do nothing to help, also guilty of these crimes? Can we be held jointly responsible for genocide if we let those events happen and are fully aware that they are happening?

According to Nicodemus visual art can neither portray nor explain trauma. It can show that it is  impossible re-create traumatic events to their full extent. Reference Scroll to Massacres, Genocides and Ethnic Cleansing, one of her most famous works, is a powerful example of this. It consists of a 16 m long paper roll cataloguing all of the documented massacres in the history of mankind. The work shows the limitation of visual resources in portraying ultimate suffering and evil.

Artist, writer and art historian Everlyn Nicodemus has lived in Europe since 1973, presently in Scotland. She researched the relationship between visual art and trauma caused by racism, exclusion and persecution.