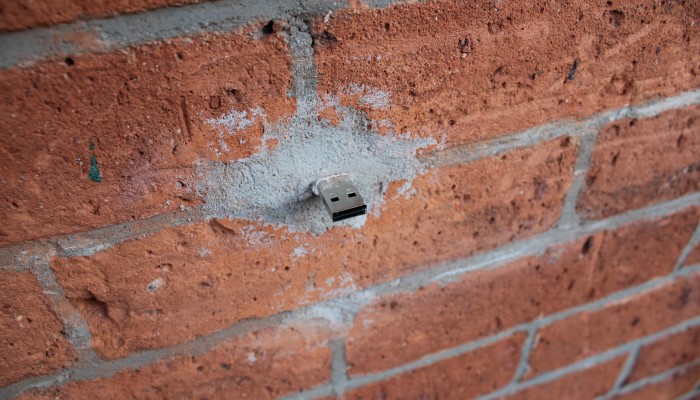 Aram Bartholl gained prominence with the work Dead Drops (2010), a title that refers to the secret places where spies left information behind during the Cold War to be picked up by others. Bartholl’s Dead Drops are USB sticks which he bricked in walls, on poles or buildings, in more than 1230 public locations. You can connect your computer to the strangest places to exchange files.

On the square in front of the Museum Fridericianum in Kassel, once every five years the center of the dOCUMENTA, Bartholl placed the seven metre high sculpture Hello World! The viewer recognizes the object directly as the big red (A) which serves as a location marker in Google Maps. Hello World! is an ironic interplay between the virtual and the analog reality. The overlap of public and private, online and offline, technology-mania and everyday life, is central. Bartholl notes not only, he also finds playful ways and brings to light the friction that remains hidden in the seemingly seamless fusion.

Aram Bartholl raises awareness of our new universe where the analog and the virtual world effortlessly blend into each other. With sense of humor, he focuses on the growing influence of the internet on our daily lives.