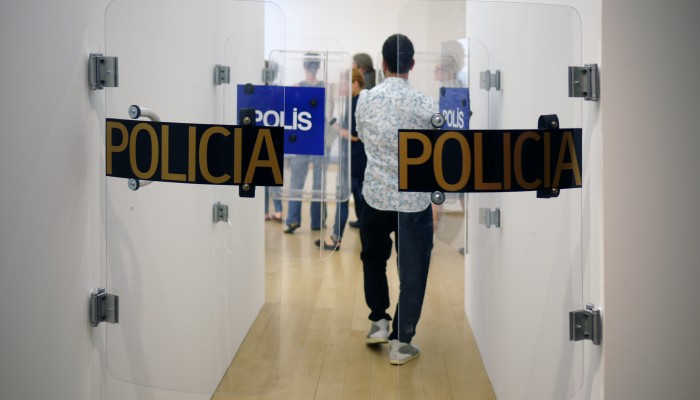 Although Ahmet Öğüt’s work is political, he himself prefers to describe it as ‘social’. How people live together in a society – and how that could be done differently – or better – is what interests him. In The Swinging Doors, he comments on corruption, police brutality, censorship, and other social evils. These are very familiar themes, due to his background as a Kurdish Turk born in the civil-war-ravaged city of Diyarbakir. “Imagine a place where school children are interrogated because they participate in a painting contest for the International Day of Peace,” says Ögüt. It is just one example of his youth marked by military force.

The artist is also trying to make the world a little better with projects such as Silent University. Here, refugees, asylum seekers and migrants gather to exchange knowledge, rather than spending their days doing nothing. Öğüt also collaborated on the development of open-source software that enables computer control using eye movement – a great breakthrough for ALS patients.

Turkish-Kurdish Ahmet Öğüt has lived in the Netherlands since studying at the State Academy of Art in 2007-2008. As an artist he focuses on issues dealing with injustice, and suggests solutions – often in a playful way – to social problems.