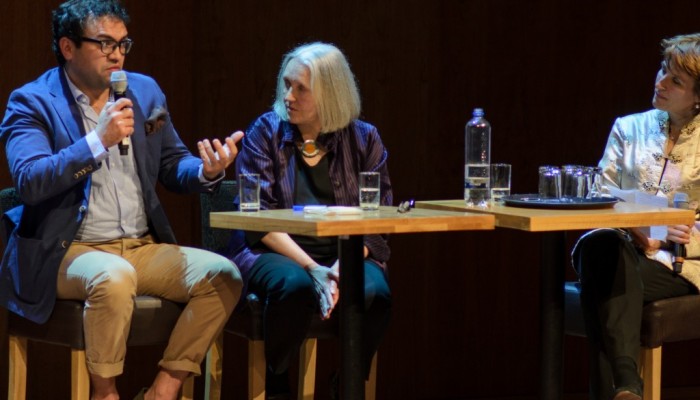 Looking Back: How to be seen?

In the first Life Hack Marathon, Saskia Sassen discussed not how to make the “invisible” visible, but rather the mechanisms that contribute to their invisibility. In her mind, several parts of the high-finance world should be held responsible. Although not territorially anchored, they are the ones who physically drive the lower economic classes from our society. Think of the inner cities of ‘global cities’ such as London and New York. Follow-up speaker Zihni Özdil challenged the academic world to explain this in layman’s terms: such a sharp analysis deserves to be understood by everyone.

Want to find answers to the question How to be Seen? The table was set in the first -only accessible by invitation – Life Hack Marathon. Project leaders from the area of healthcare, representatives of the shelter for asylum seeking refuges Toevlucht, consultants from Twynstra Gudde, managers of health institutions, former prisoners, artists, experience experts from the Tussenvoorziening, employees of the Netherlands Institute for Human Rights and the National Ombudsman, members of LFB and creative entrepreneurs worked together to make Sassen’s system analysis palpable, and together they formulated all the possible potential interventions in the world: life hacks.

The workshop was built up around the contributions of artists Lino Hellings (PAPA, participating artists’ press agency) and Martijn Engelbregt (Circus Engelbregt), game-designer Kars Alfrink (Hubbub), B&K designers and the media collective SETUP. Their contributions provoked and stimulated the participants to search together for new solutions. PAPAfinds presented the results of a photo-research conducted at institutions for homeless people and asylum seekers who have been denied residence; contemporary examples of ‘invisibles’. Media lab SETUP designed digital prototypes of life hacks for every Life Hack Marathon. Life Hack Marathon # 1 opened the series with ‘Hacking Habitats’, a digital system that helps to informally establish contact with the neighbours in order to build up local networks. During life hacks of this service participants hack their own habitat.

How to be seen
Saskia Sassen on Invisibility. A lecture on the expelled human.
Public lecture: April 9th, 8 p.m. Tivoli Vredenburg